Portable chargers are the most accepted way to charge electronics in today’s market. As our dependence on technology increases, so does our requirement to stay connected and of course, charged. Portable chargers have become so prevalent as it has removed the need to be plugged into the grid to charge smartphones and devices.

Portable chargers are useful as a secondary power source for smaller electronics but they don’t have the power or capacity to run larger electrical items such as fridges or laptops. That is where larger power banks come in to play.

A good quality power bank, or mini generator as some brands like to call them, pack enough punch to run AC, DC and USB devices up to a limit and make extended time away from the grid a much simpler and more sustainable thing. 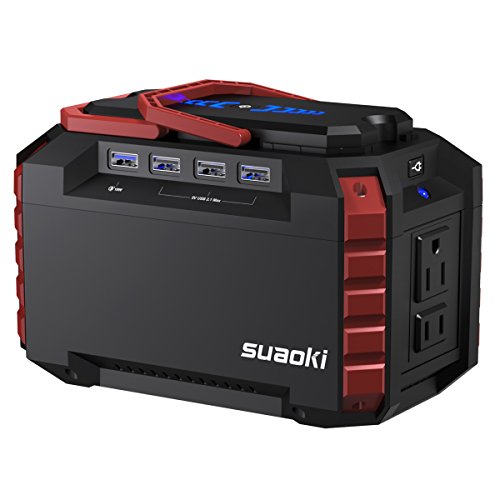 The Suaoki Portable Power Station is a small lithium-ion power bank with a 150WH capacity. Running at 3.7 volts this gives you 40500 mAH and at 11.1 v 13500 mAh which is a powerful battery pack.

Suaoki Portable Power Station is super light for its size and power, weighing in at just over 2.9 lbs. and measuring 7.3” x 4.3” x 4.7.” To give you some idea of comparison, the Rockpals 178WH portable power pack which has virtually identical dimensions weighs in at 3.5 lbs., which is a significant difference. Even so, Suaoki have included a set of sturdy carry handles to ensure portability is maximized in the outdoor environment.

The Suaoki Portable Power Station can be charged using solar power, and the kit comes complete with an MC4 connector lead that is the universal adaptor for the majority of solar panels. You need to buy the solar panel separately, but Suaoki make both a 60W and 100W that are elegant panels that fold into themselves for easy transportation.

On a sunny day, the manufacturers claim is that it will fully charge the battery pack in eight hours. Coincidentally this is the same time it takes to charge using the AC wall plug as a sign of how efficient solar has become in recent years. Also included in the kit is a 12-volt car charging lead. Between all three methods of power, you can be sure you will always have a power pack ready in reserve.

From an output point of view, the Suaoki Portable Power Station has a range of power outputs including:

To give you some idea of the power levels this battery can sustain based on some anecdotal calculations using the manufacturer's guides, a 60W equivalent LED light (9W) plugged into to AC socket would last more than 18 hrs. When tried with a 32” LED TV you can watch over 4.5 hours of TV, which is a pretty mean feat for a power pack.

The power inverter uses Sine wave technology and is surge protected which is the most efficient method for powering electronic devices such as laptops and tablets.

Included in this kit is the main portable charging station, the 12 Volt DC car charging adapter cable, an MC4 cable for attaching the solar panel. There is also an AC power adapter, a female DC adapter handy for in-car DC devices, and a 180 month warranty.

Who is this product for?

This power pack would also be an essential part of any aspiring photographer filmmaker or any profession where technology features heavily in your daily tasks.

It’s nice to have the security of having access to this scale of power when out on your own. It's incredible how connected everyone is nowadays and having back up power for everyone's laptops, and phones make for a peaceful journey!

If you're on a tight budget, the Paxcess 100watt portable power station is worth a look. With 151 WH, this battery pack also packs a punch and is also solar powered meaning it is ideal for extended times away from the grid. Featuring 3 DC outputs, 2 USB outputs, and 2 AC with a max power of 100W, it has a similar performance as the Suaoki Portable Power Station.

The Suaoki Portable Power Station looks excellent and has impressive performance. It is super lightweight for its size and power as this makes it easy to pack into bags for camping fishing and hunting without it becoming burdensome.

It could do with a bit more punch when it comes to AC appliances but to be fair you don’t need a TV and fridge and an AC unit when you head off camping for the weekend as that defeats to the point of getting away from it all.